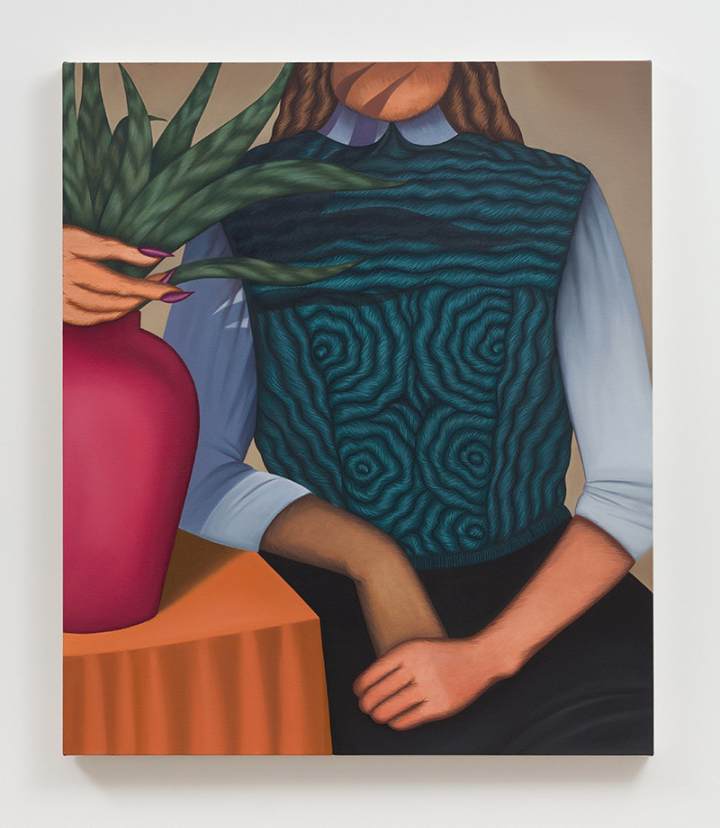 “If the Chicago Women were drawn to Surrealist values, to supposedly overthrow conventions, and the movement attracted many adventurous souls.” and the surrealists had a baby, I think it would look a little like my work,” says Brookyln-based painter Julie Curtiss of her style. Working with a vivid colour palette between oils, acrylics, vinyl and gouache on paper, she explores themes of culture, nature and female-focused art narratives.

Growing up in Paris to a Vietnamese father and French mother, Julie filled her days with drawing. This pastime soon became a cathartic process she used to deal with the anxiety and fears of adolescence. “It may sound cliché but I really had a rough time during those years,” she tells ‘It’s Nice That’. However, her interest in the arts later became more than just a creative outlet for her emotions, as she decided to pursue a career in it. “I thought what I really wanted to do was illustration, but after a year of prep school I quickly understood that painting was for the best way for me to freely express my thoughts.” (It’s Nice That Daniel Milroy Mahler 2019)

“I think my work has become more defined over the years; it use to be sprawled aesthetically, but I have refined my artistic vocabulary in the past few years to make it more specific and unique.”

“I understand there is a common effort to democratise the art world and shed light upon under-represented artists at the moment. However, for me, artists being labelled according to social groups could be more damaging than helpful.”

“I am fascinated by female archetypes and their representations throughout art history.”

I enjoy associating humor with darkness, the uncanny and the mundane, grotesque shapes to vivid colors. I work from mental notes or imagination. With ideas of narration, I will utilize recurring elements from one painting to another, or leave some of the action outside the frame, thus creating a form of suspense.

My artworks are psychological. By omitting parts of an image or suggesting abnormal situations, I would like to contrast a feeling of familiarity with surrealism.

I am interested in the various aspects that female identity can take, especially through the opposite notions of Nature and Culture. I like to represent smoking teacups and cigarettes, objects that call to mind a domestic, tamed image of women. On the other side, organic, ambiguous body parts allude to the archetype of a woman fused with nature and her animalistic drive.

With faceless portraits of women, gnarled fingers and toes, and voluptuous bodies composed of hair, I would like to present the viewer with an enigmatic puzzle, an invitation to reflect on the idea of an unfixed, ever-changing self. 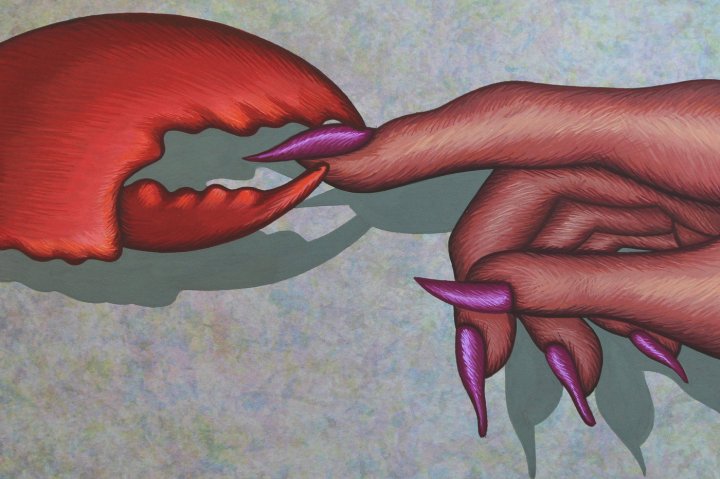 “Surrealism had a very high proportion of women members who were at the heart of the movement, but who often get cast as ‘muse of’ or ‘wife of… Women were drawn to Surrealist values, to supposedly overthrow conventions, and the movement attracted many adventurous souls. These artists engage with Surrealism not just aesthetically, but as a philosophy. Surrealism is about seeking the unconscious and jolting ourselves into new ways of seeing.” (Greeves -Izabella Scott) 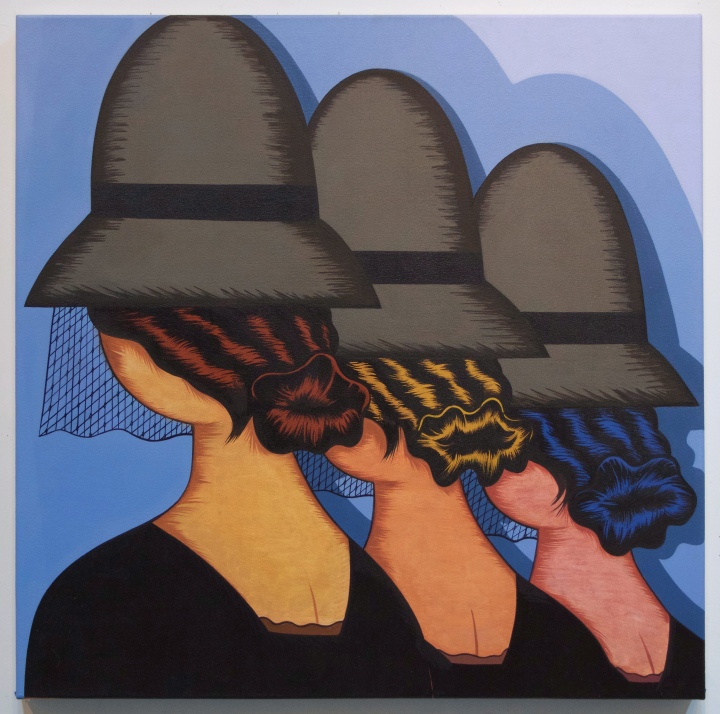 After school, I worked as a security person at the Centre George Pompidou in Paris. There I was very impressed by a series of black and white drawings by Mike Kelley. A few months later in Japan, I started a series of works on paper with cartoon-like imagery, with big droopy eyed, depressed characters. This was the beginning of a more graphic style in my art. When I came back to France, I found out that my mother had cancer and the 3 years that followed were dark years. My art changed a lot and became a way for me to funnel my anxiety. I turned inward with my art, trying to make sense out of life.

Finally, my art went through a new phase a few years after I settled in New York. I slowly healed from my mother’s death and my art became lighter and more in phase with new life challenges: affirming myself as a woman, embracing the multiple facets within myself, engaging more with the outer world.

I find a lot of my inspiration in French and European painters/sculptors from the 19th and 20th centuries… because a lot of these artworks are popular, I enjoy how they worked their way into people’s subconscious. They are iconic and therefore they work on several levels, subliminally but also overtly. People love drawing connections, and understanding an image within a frame of references. I like to use old masters and divert the meaning of their works, adding anachronistic elements or simply borrow parts that are timeless. My attachment to some images is also sentimental (Degas, Manet, Vuillard, Ingres…), they were the first to draw me in and work on my imagination as a child. 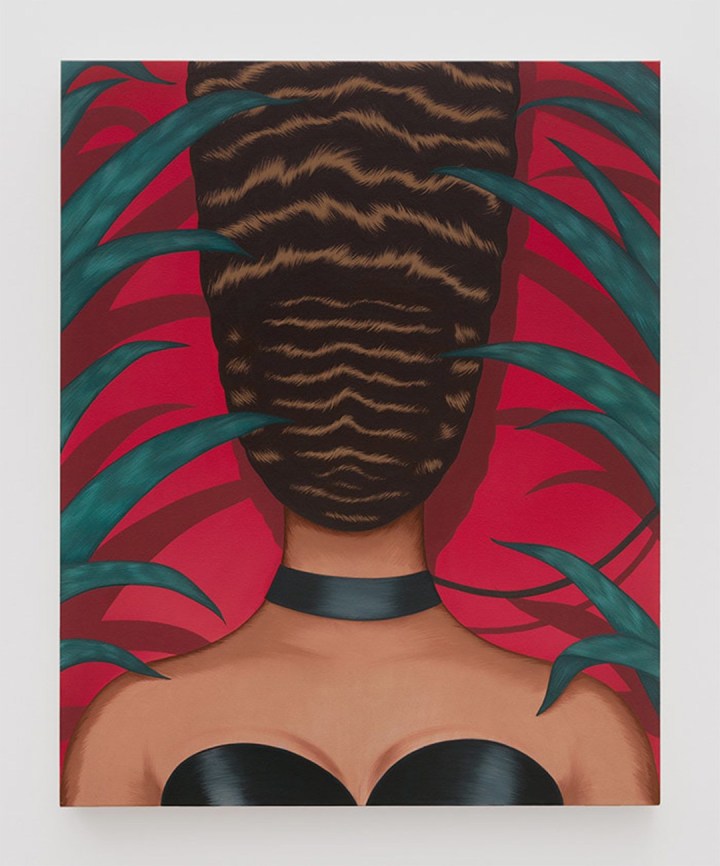 Hair evokes the primordial in my work. With nails, it’s a part of our bodies that grows of its own and that we can sever off without pain. It refers to the wild, the untamed, the beast in us. In the myth, the hair on Medusa’s head is made out of snakes. In our societies, hair is combed and braided and the nails manicured. Women transcend these physical attributes for social ends… As a woman, I am interested in the way we fashion our bodies, to be reflected through the other’s eyes.

Julie Curtiss creates illustrative and surreal paintings that address themes of femininity, identity, and the grotesque through investigations of the female body and abstracted forms. Looking at one of her paintings is like looking into the land of Oz — reality is present to a degree, but the surreal, fantastical, and absurd merge with our perception of narrative truth, causing a disruption In our perception of the very reality that we cling to. Working with both acrylic and oil on canvas and gouache on paper, Curtiss’ works blend graphic illustration with figurative abstraction, combining recognizable imagery with imagined spaces and figures. 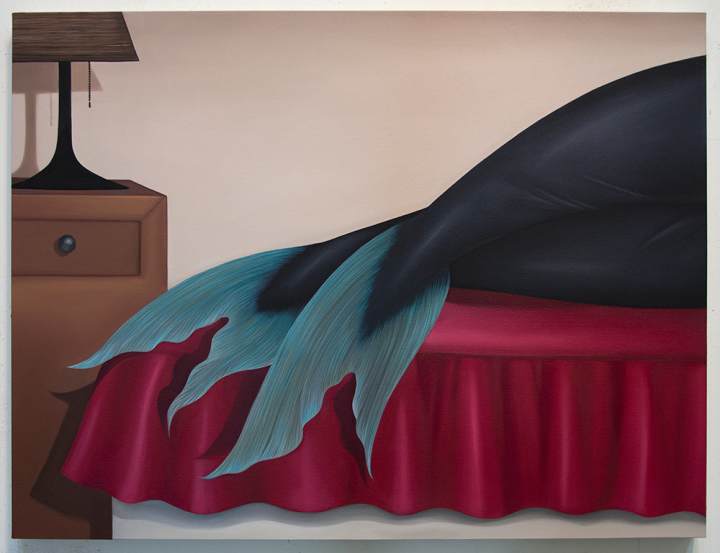 The resulting compositions are detailed paintings of surreal scenes; mysteriously enticing, haunting, and playful. Utilizing recurring motifs throughout her work — hair, nails, cigarettes — Curtiss draws attention to the power and implications of objects as symbols and their resulting visual effects. Her work most often explores notions of femininity and its relationship to both nature and social culture through archetypal images that signify context beyond their primary visual state. By obscuring her figures or altering the image perspective, the viewer becomes implicated as a voyeur in a narrative that extends beyond the confines of the canvas, leaving the content, narrative, and meaning open to a nonlinear interpretations and implied meanings. 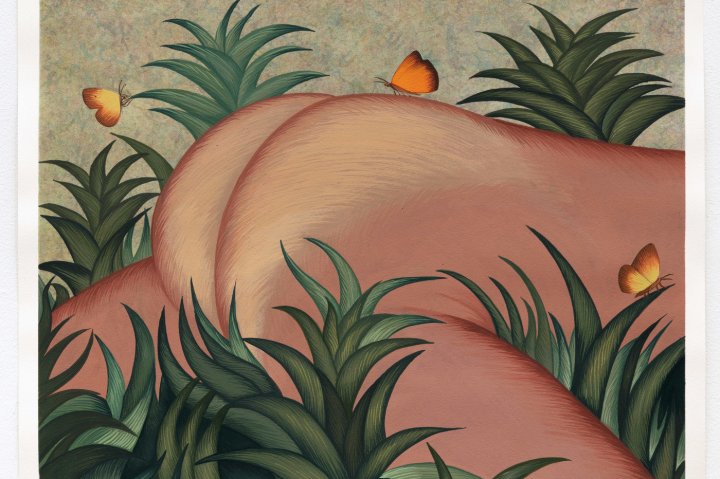