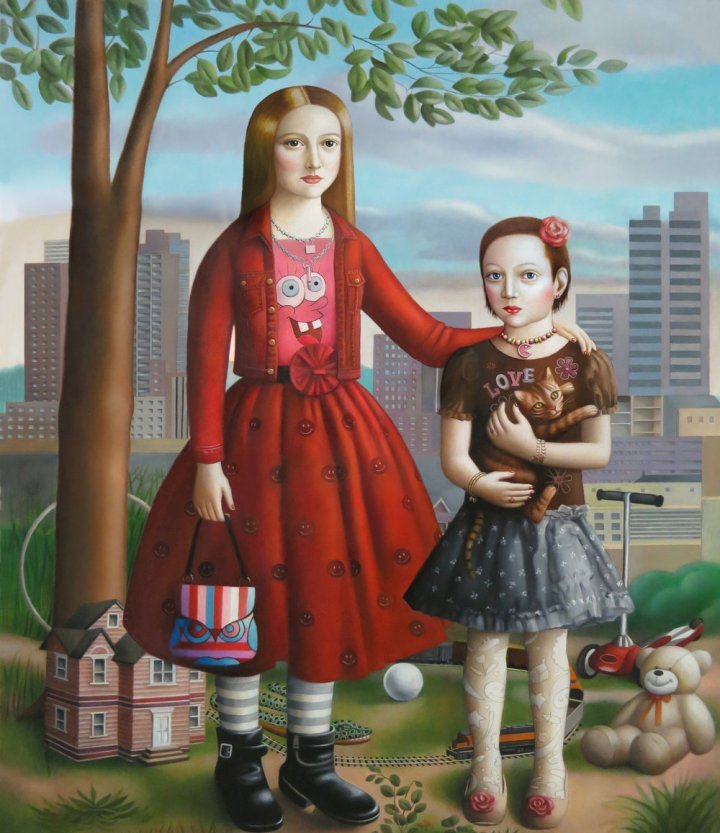 In updating these paintings, Hill has depicted urban children decorated by logos, tattoos, piercings, drugs and digital media. This allows for an examination of the phenomenon of innocence, its value, and the possibility of its survival in a fast moving world. With technical proficiency, Hill explores the charm and directness of Folk Art by employing the era’s distortions of perspective and anatomy, as well as a highly personal perspective. 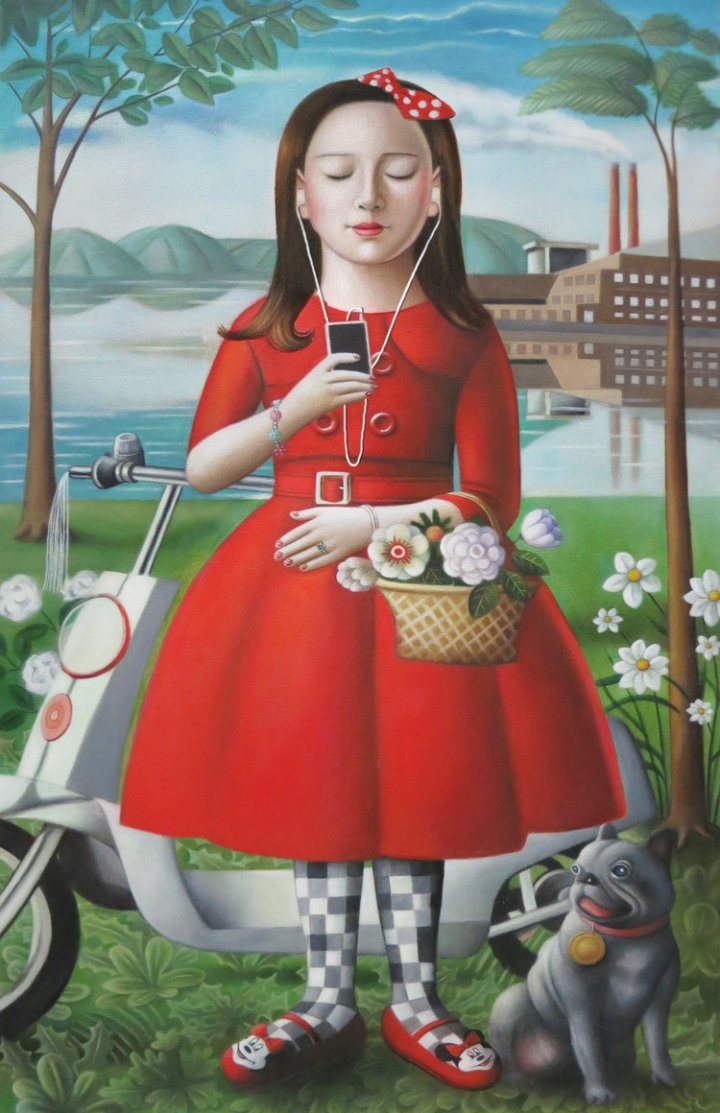 This new series of paintings continues Hill’s examination of earlier eras in art history. The eras are chosen for her stylistic kinship with their respective artists, allowing her to carry on a dialogue with them. Hill revives the styles and makes them her own by exploring themes that can be traced to the present day. Through portraiture, a genre that runs throughout art history, Hill utilizes a variety of poses, gestures, fashion and accouterments to make social, psychological and anthropological statements. Humor emerges through the juxtaposition of modern day fashion and historical figures.

Amy Hill received her BFA from Carnegie Mellon University and studied at New York University. She has received grants from the Peter S. Reed Foundation and Art Matters and a studio grant from the Elizabeth Foundation. Hill received nominations for the Catherine Doctorow Prize for Contemporary Painting and membership in the American Academy of Arts and Letters. She received a Purchase Award from West Publishing Company, the Juror Award for the 2006 NYU Small Works Show and an Honorable Mention from the National Arts Club. She has attended residencies at Byrdcliffe in Woodstock, NY, The Virginia Center For the Creative Arts in Sweet Briar, Virginia, and Cummington Community of Artists in Massachusetts. She has exhibited extensively nationally and internationally. Her work has been reviewed in The New York Times, Harper’s Magazine, Artnet Magazine, Artinfo.com, and Cover Magazine, as well as other national and international publications. She currently lives and works in New York.

Hill is known for her witty reworkings of Flemish and Netherlandish portrait paintings, which are carried by her impeccable technique, mordant humor and deadpan delivery. Interestingly, many of the same compositional and narrative devices are often in play. Whether the early Americans were quoting Northern Renaissance painters is a question for a specialist, but it seems entirely possible in light of the period’s Renaissance Revival. (Or maybe the two contexts are merely homologous, and the common proclivity, for example, for three-quarter views of the head has no greater significance than the fact that it is a timeless challenge to paint an ear.)

“Quoting is an inevitable component in all acts of communication; it is what makes communication possible.” The precision of that message depends in part on mutual understanding of the material quoted, and Hill’s subjects are fluent in the nuanced language of the corporate identity, the public image, the mission statement, the celebrity endorsement. They know what’s cool, what used to be cool, what might next become cool. They define themselves by association therewith, through a hybridity of self-branding, as did their counterparts of an earlier era by means of a different but equally transparent vocabulary of symbols. By quoting the quoters, Hill views with a gimlet eye McEvilley’s “vast image bank of world culture” even as she signs on to it.
(Artcritical May 6th 2016)