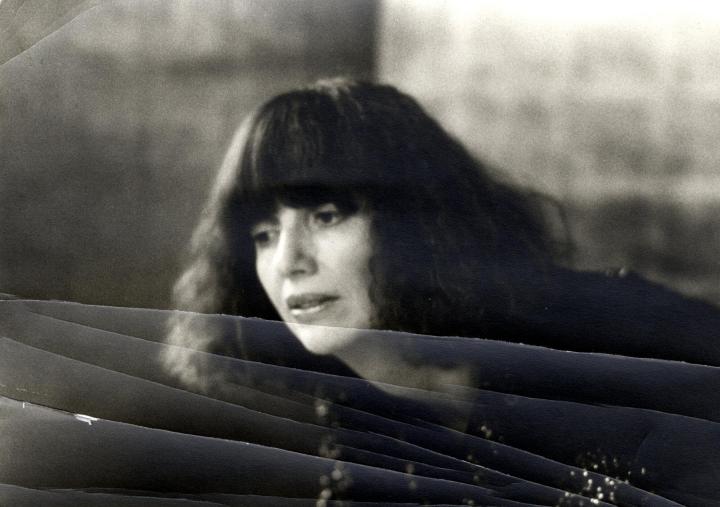 Overall, Turbeville’s work was characterized by a seemingly paradoxical sense of both decay and sensuality. She often set her scenes in decrepit, once-grand interior spaces and framed her shots in such a way that emphasized their cavernous emptiness and amplified the smallness and fragility of her models. She also shot out-of-doors, including in such historically resonant places as the woods of Normandy, France. There, she captured models in attire that appears utilitarian or vaguely militaristic, in poses that seem to suggest soldiers standing in formation or immediately after capture.
Turbeville’s compositions recall those made in the late 19th- to early 20th-century pictorialist style, characterized by a soft-focus, painterly technique, and stylized or romanticized imagery. To further heighten the feeling of removal from the everyday in her photographs, she would manipulate her negatives by, for example, scratching or sprinkling dust on them, or she would intentionally overexpose her prints. 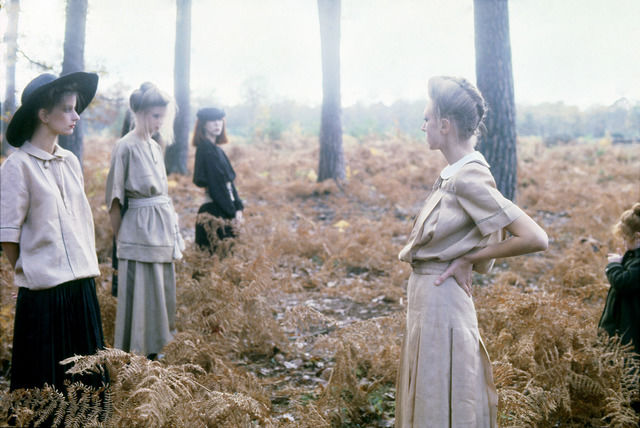 …or Turbeville, conveying the psyche of the model wearing the clothes was almost more important than showing the clothes themselves. “A woman in my pictures doesn’t just sit there,” she once said. “In what kind of mood would a woman be, wearing whatever? I go into a woman’s private world, where you never go.” (Karen Kedmey, Artsy 2015) 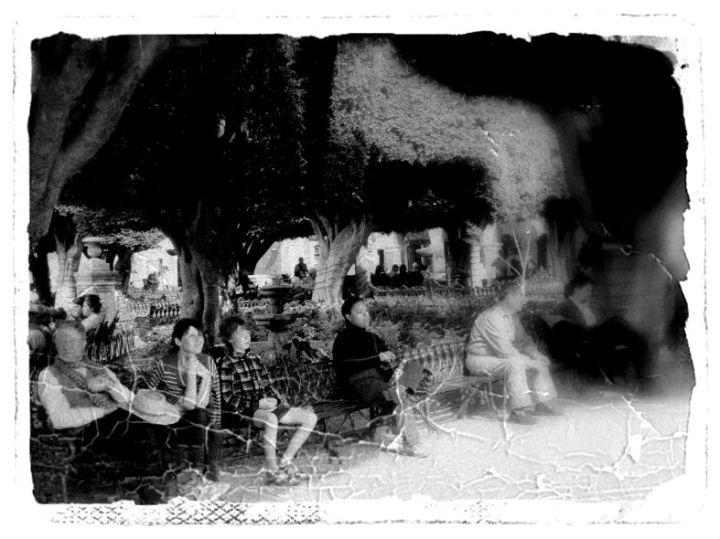 “Through a series of vignettes in stills, I wish to use the medium of photography to explain a group of rather eccentric people – sometimes one or two, sometimes many – placed in settings that help describe them. These people perform like a repertory company, often reappearing in different roles. My pictures walk a tightrope. They never know… I am one of the very few ‘enfants terribles’ still claiming to take fashion photography. I am not a fashion photographer, I am not a photojournalist, I am not a portraitist. The photographs are a little like the women that you see in them. A little out of balance with their surroundings, waiting anxiously for the right person to find them, and thinking that perhaps they are out of their time. They move forward clutching their past about them, as if the ground of the present may fall away. Their exteriors seem walled-up and introverted; the interiors endless… airless. The very print quality reflects something in the women that is hesitant, a little faded and scratched; or that, having emerged into a light too harsh, stand frozen in space, overexposed.” (Wallflower 1978) 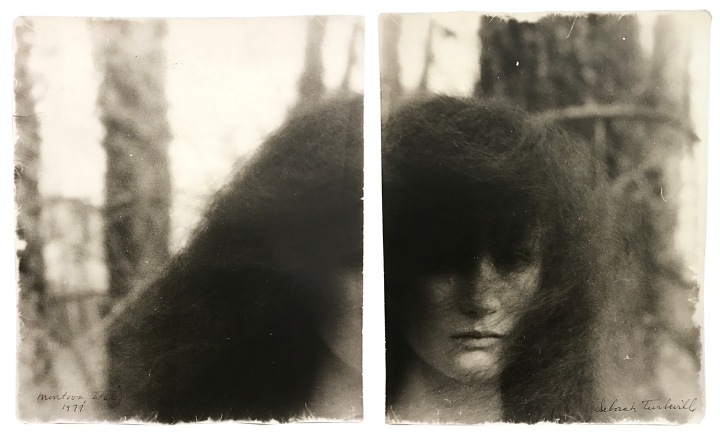 Deborah Turbeville was born in 1932, in Boston. Summers were spent in Ogunquit, Maine. ‘Beautiful Place by the Sea’ is the oceanside township’s motto. ‘Very bleak, very stark, very beautiful,’ was Turbeville’s description of it. Life was comfortable – she went to private school. Yet her mother described her as a ‘shy and scary child’. Which is as it should be. The uneasy shuffle of ambiguity is the essence of Turbeville and her work – which itself shuffles between fashion magazine and art gallery, never fully at peace in either place.

‘The idea of disintegration is really the core of my work.’ 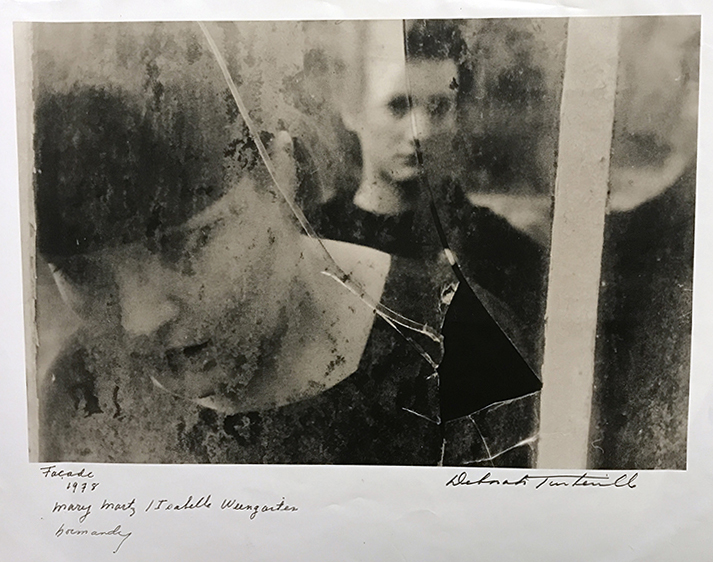 ‘One of the problems I have with photography in general and my work is that I have an extremely enlarged frame of references, and it’s frustrating sometimes that people don’t understand a photograph. So I wanted to show, if I could, some things that I thought maybe people didn’t understand. I like people to get involved and see that there’s so many influences, between filmmakers, painters, writers, poets, and all the things I’ve absorbed. It’s a big part of what’s important for me.’

Deborah was quite independent and liked to be a little mysterious. She loved Russia, the old Russia, and spent a lot of time in St Petersburg. I think, though I may be wrong, that she was a former model, but she was not of the trendy world of fashion. In fact, she was the opposite. She did not follow; she did her own thing. She never called herself an artist and when others did, she would say: “I’m a photographer.”

For me, though, she was an artist. She led a kind of revolution in fashion photography with her early work, with the atmosphere and locations, but she was not a fashion photographer. The term is too confining for what she did. She made these beautiful books about places and buildings, like her Versailles book (Unseen Versailles), but I do think her fashion photographs worked against her in the art world. She was always somehow in the middle – between the worlds of art and fashion. She never really fitted into either. (Franca Sozanni, Vogue Italia The Guardian 2013) 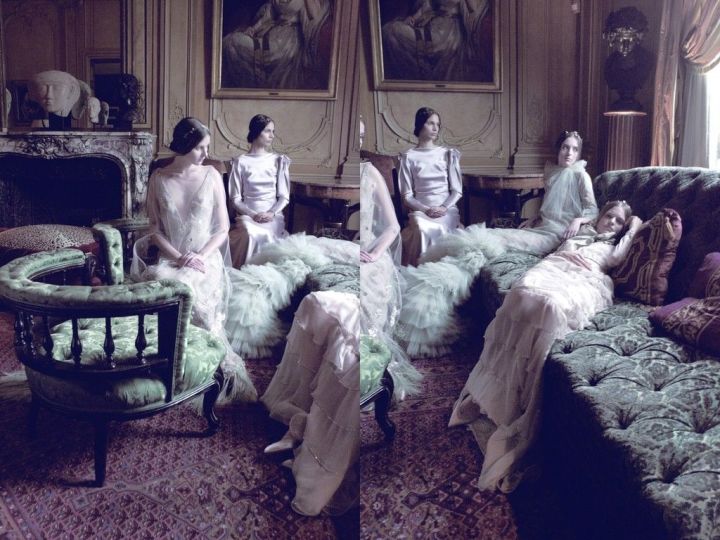 Turbeville’s photographs are recognizable by their grain, by their colors of pastel, sepia, or black and white, and by the image blurring. She sometimes reworks her shots by scraping or taping them with the help of her assistant and collaborator, Sharon Schuster. According to Pete Silverton, these photographs are “consciously damaged goods.” Furthermore, according to Turbeville, “I destroy the image after having created it (…) Erasing a bit in such a manner that it is never completely there…” Or: “The idea of disintegration is really at the heart of my work.” This work of alteration is one of the elements that make Turbeville an artist, as she provokes a reflection on the medium, and the medium is in itself significant. Her images, “scraped, twisted, erased, damaged artificially to give the impression of old clichés, contradict the technical perfection that even an amateur photographer can get these days. Turbeville exposes the lie that with technique and determination an artist who seeks to create imaginative content resonates ambiguities.” “Yes, the images’ apparent stillness hides an undercurrent of violence (…) This violence is reinforced by the artist in her work: she violates her own images.” (Wikipedia)

Turbeville picked up a camera in the first place because, as a fashion editor, she was having trouble finding someone to execute the visions she hoped for. Mentored by fashion photography luminaries like Richard Avedon and Bob Richardson, Turbeville soon began shooting her own work full time, leaving the editorial world behind. Rejecting the glossy, sexualized, and female-commodifying style of popular ’70s photographers like Guy Bourdin and Helmut Newton, Turbeville’s work instead turned inward. “It is the psychological tone and mood that I work for.”

It is an unorthodox vision, at once haunting and memorable. The characters (mostly women) interact with their strange, elusive environments as anachronisms; misplaced, out of sync with their time and context. A group of Turbeville’s favorite actresses and models (mostly unknown) act as a repertoire cast who interpret these endangered species. Mutations in a mannequin workshop, statues in a Paris art school, automatons in a derelict factory. They reveal inner thoughts, emotions, and a sense of unease. There is a sense of fragmented dreams, dislocation, hallucination, a time without boundaries — ongoing — the past imperfect. (Marisa Bartolucci)

She photographed her models intimately, yet the emotional gulf between them and the viewer at times seems insurmountable, as though seen through a scrim. What these women might be thinking as they drape themselves over dusty velvet couches, or huddle together in furs over an unlit fireplace can only be known to them, and one senses that was what Turbeville was getting at. “Glamour and beauty don’t always go hand in hand with emotional security and happiness,” she once said. “Sometimes the two go the very opposite ways. Some simple, plain woman out in Wyoming probably has a more pleasant life.” (Max Lakin ) 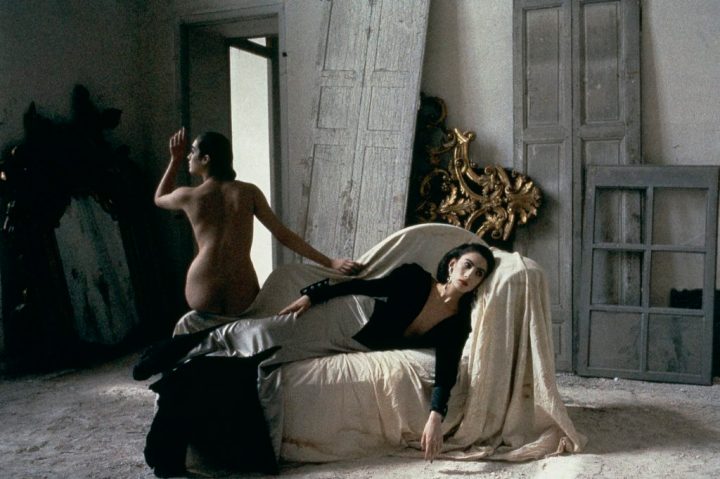 “I’m not a romantic photographer,” she told one interviewer. “I want to get on people’s nerves. Eerie. Not definitively eerie like Joel-Peter Witkin … mine is a more subtle way.” If her work was to be construed as “romantic,” she said it was in the 19th-century sense of the word. She wanted to be likened to Charles Baudelaire and Edgar Allen Poe.

“People started talking about Auschwitz and lesbians and drugs,” Ms. Turbeville recalled in an interview quoted in the 1991 book “Appearances: Fashion Photography Since 1945,” by Martin Harrison. “And all I was doing was trying to design five figures in space.” (Margalit Fox NY Times 25/10/2013)

Turbeville was not only prolific and internationally published as an image-maker, but was also a maverick printmaker. She used unusual papers, experimented with toning and alternative processes, and intentionally scratched her negatives, striving to imbueherprints and collageswith a sense of decayand timelessness.

Een gedachte over “DEBORAH TURBEVILLE (1932-2013): an idea of disintegration”