Harvey said each photo is a contrast between the darkness of the world outside—the misery of the news cycle, the struggles of interior life—and the way a child sees the world—all brightness and glitter, curiosity, and wonder. Each sunny picture has a shadowy counterpoint. The contrast seems to say, “This is what I have,” and “This is how it almost disappeared.”
“We’re dealing with this minutiae of time and talking about these really grand ideas of the business of being human,” Harvey said. Much of her work is concerned with the nature of relationships, the fragility of existence, the general experience of being human.” ( (Elyssa Goodman in Vice 2018) 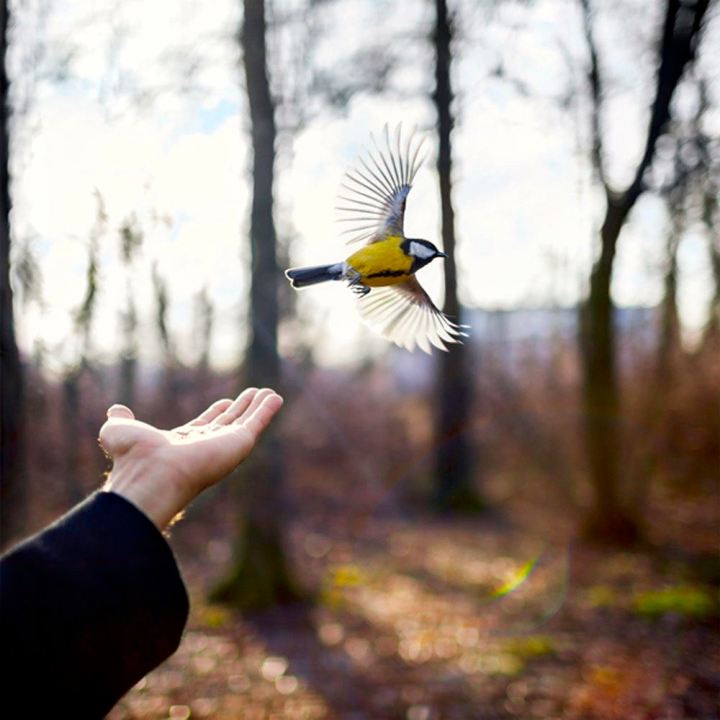 “I feel sometimes frustrated about being asked about the role of a mother—of being a woman and a mother—which are two completely separate things. And not because it doesn’t play a role in my life, but it’s just one part of who I am as a human and an artist,” she said. She acknowledged that there is an inherently feminine quality to her work, and when she’s addressed via email as “Mr. Harvey,” which frequently happens, she is shocked that strangers don’t realize she’s a woman. But even so, her work is first and foremost about humanity. (Elyssa Goodman in Vice 2018) 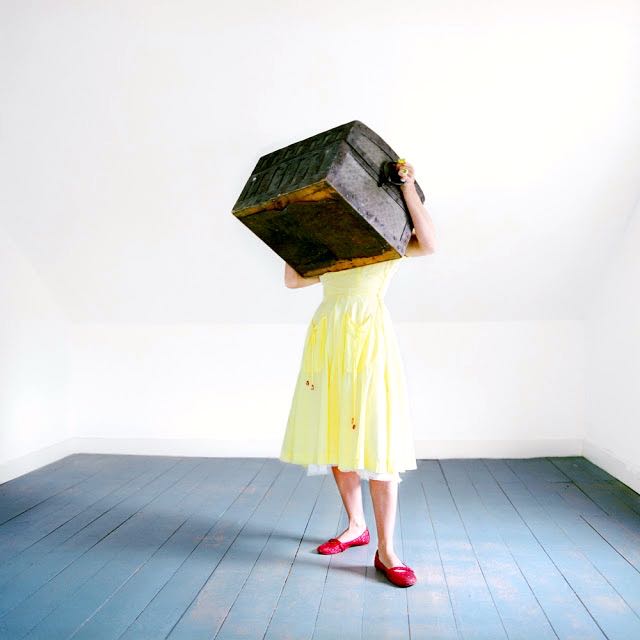 Cig Harvey (born 1973) is a photographer whose practice seeks to find the magical in everyday life. Rich in implied narrative, Harvey’s work is deeply rooted in the natural environment, and offers explorations of belonging and familial relationships. She is represented in the United Kingdom by Huxley-Parlour Gallery.

Her photographs tap into universal elements of the human experience including love, loss, and belonging. Harvey has introduced a greater spontaneity into her more recent work, using models such as her daughter and husband to create visual narratives of her life in Maine. Her second monograph, Gardening at Night, published in 2015, focused on quieter moments of the everyday to which Harvey adds her symbolic and rich use of colour.

Harvey reminds us that the camera shutter suspends only what is fleetingly in front of it: “We are only this moment, the length of a photograph.” This paradox, due to the longevity of a photograph, pairs beautifully with the bittersweet theme of ephemerality, which is both ‘Orchestra’ – creative and joyful – and ‘Bomb’ – destructive and fearful. In the last pages, a man glows red in front of a blazing bonfire and two boys point a toy gun at the viewer. It’s a mature and sobering terminus; one in which we are reminded that, inside and out, we are all orchestras and bombs. (Sellna Oakes This is tomorrow 2017)

“Everything feels very temporary. We have these short lives. How can we pack as much into them, and love fiercely, protect fiercely, give fiercely, deal with difficult things, and come through other side?” 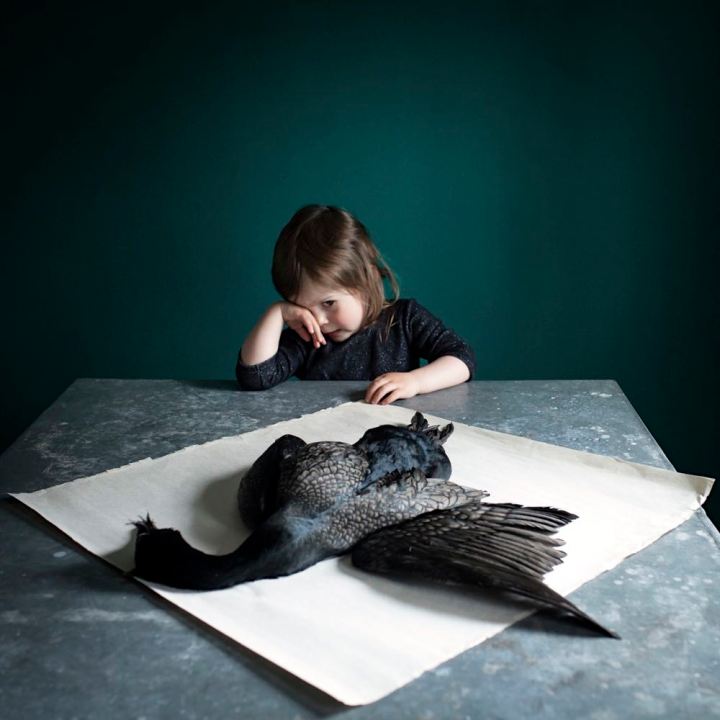 ‘For me, it’s never been about the pictures, it’s always about the stories behind the pictures. So if there’s always new stories to tell because I just had this new, awesome experience today that I’ve not had before, then there’s always new excitement behind the work. So I think it’s living that is exciting, and then trying to turn that story into pictures. And that’s why it never feels old. And sometimes I’ll make an image where I feel like I’m repeating myself, you know that, like “uhhh alright.” And then, because you know you’re not being brave enough. So I’m always trying to make work that I haven’t made before, and that’s a good challenge.’

‘When you travel, you get really excited, and everything smells different, your senses come alive, and sounds, visuals: everything is heightened. So how would it be to live like that in your everyday, I love that idea, and I try and live by it. Because I think that being more aware of my everyday makes me a better person. And I think that’s what so many of us, I don’t want to make assumptions, you know, we’re very different photographers, what we’re trying to do, we’re trying to bear witness to the world, and our work is this sort of evidence. “We’re here!” We’re all hopeless romantics, most photographers, because we’re all trying to stop time. Say that “this happened, and this happened,” we’re slowing time down.’

‘I rarely feel like I need a new direction, but I might feel like I want a different light, or you know, when it’s been winter for months and months and months. So often what I’ll do, because I construct a lot, and I have these mind maps, and I think about the pictures I want to make, but I often just get in my car and drive, too. Let the camera lead the way. Whatever I’m drawn to, there’s a reason for that.’ (Interview by Lou Noble The photographic Journal 2016)

‘Should and creativity never work, it ends up, you make things that either are boring or inauthentic, or yeah. Again, if you come back to that idea of what are you trying to say, I say this to all my students and all my talks, the camera is just an expensive pencil: what have you got to say? So what I do, I make them sit down and free write for twenty minutes non-stop. It can’t be edited, you’ve got to burn it afterwards, I literally set fire to it. So it can be as if you’re writing it for your grandmother to see, or someone else, it has to be really from the gut, really honest, and you burn it afterwards. So you write, and you figure out what comes out, and you would be amazed that something really honest comes out, and that you try and assign one word to. One word, whether it’s a date, a name, try to make it not about, don’t make it a broad word, make it as specific word that triggers something in you, and then I’ll have them mind-map it.’(ibidem) 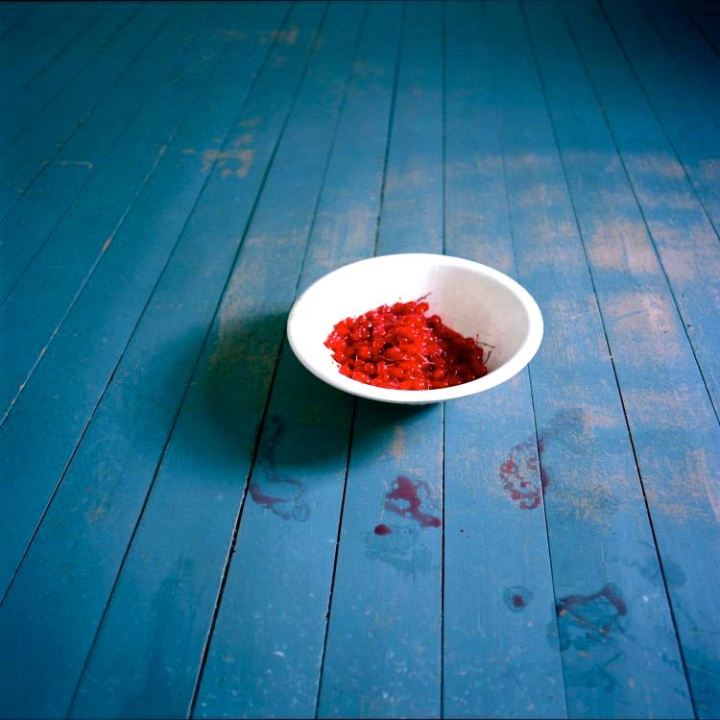 ‘I live a simple life in Maine, my mortgage isn’t crazy, so I can weather those storms quite well. The way I think about things is a bit like the early questions, I just have to go back out and make pictures, it doesn’t matter what’s in fashion in fine art, or what’s changing, or if I haven’t been hired commercially. My job is to go out and make pictures. And as long as I’m doing that, then I’m doing my job. And hopefully, they’re selling the art, but that’s the gallery’s world, or hopefully my agent will get me work. My job is to make pictures, and that’s what I always come down to, and that actually gives me a great sense of reward and peace, because that’s my job, and to not get too distracted with all the other stuff.’ (ibidem)