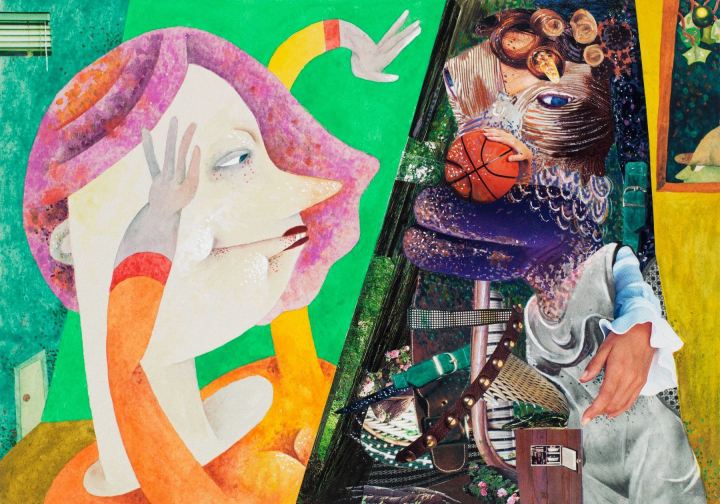 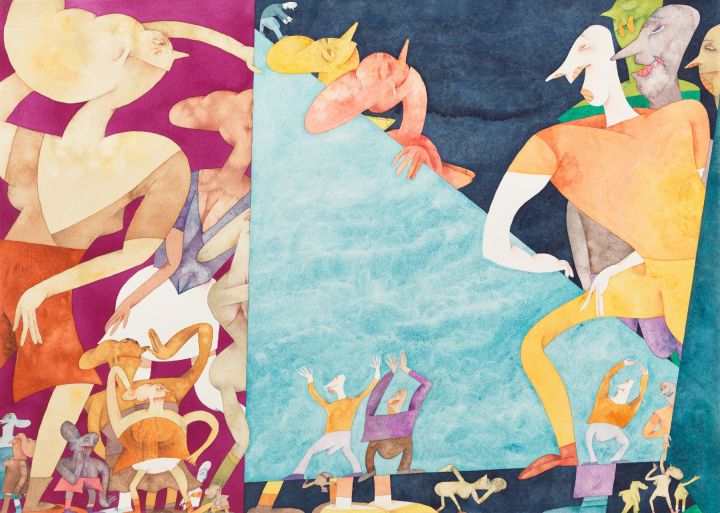 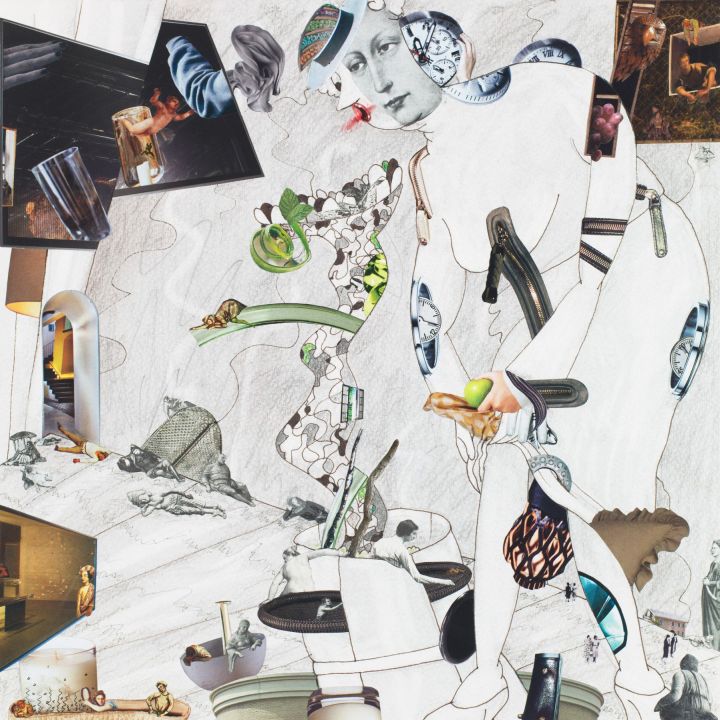 ‘Gladys Nilsson’s work is masterfully executed in vibrant watercolour, characterised by densely constructed compositions, in which figures press up against the picture plane. A unique application of watercolour- a medium with which Nilsson has become synonymous – began in the 1960s as a safer alternative to oil paint whilst pregnant. Her dedication to painting was not impeded, and her skill and success with watercolour made it her medium of choice from then on, with the artist not returning to work on canvas. In the early 1990s she began to experiment with collage and watercolour, which has since become another significant area of her practice. 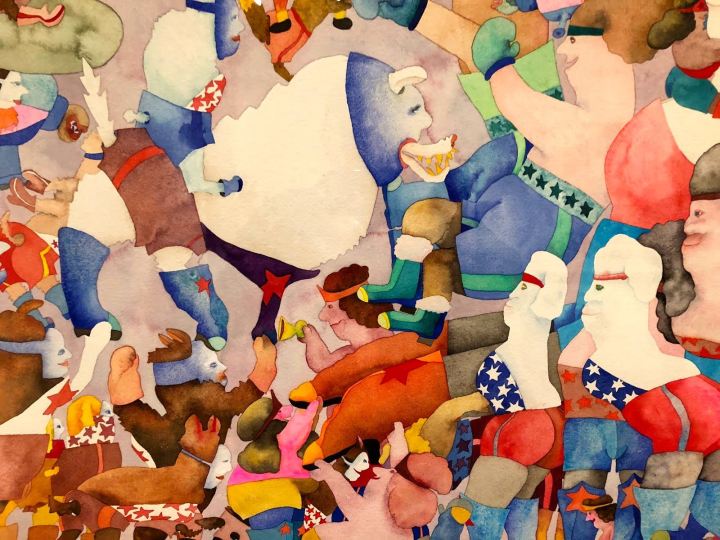 Nilsson’s works, enlivened with playful narratives, begin in the real world – a self-proclaimed voyeur, the artist looks closely at human interactions which she transforms into a universe of her own creation. From a blue-collar background, Nilsson thinks there is a lot to be said for simply getting through the day, stating that ‘I like to celebrate small things.’ Monumentalising the humdrum, Nilsson plots big moments and absurd twists for her idiosyncratic characters – favouring humour over realism, limbs unnaturally contort and curve. Unencumbered by the rules of gravity, scale or proportion, figures of varying sizes fill the frame. Drawing inspiration from fine art and mass culture, the artist attributes rapid scale change to both an appreciation for Renaissance alter pieces and growing up with the Sears catalogue which formatted clothing advertisements with a large image alongside smaller images of all the available colours.’ 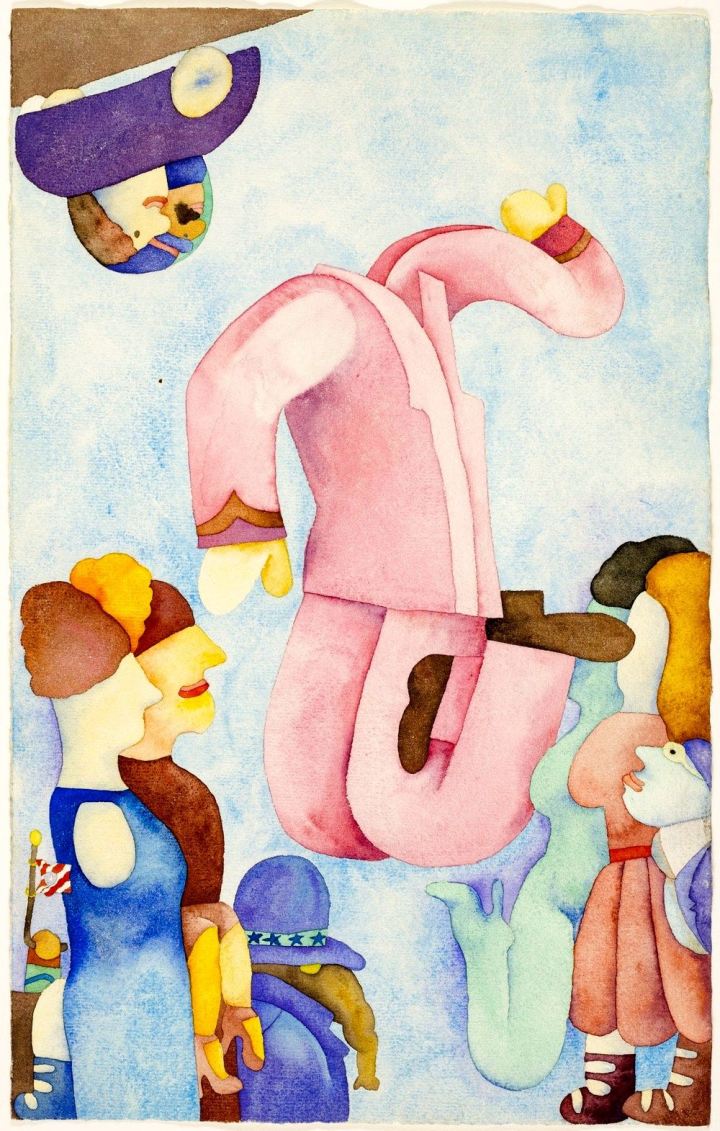 Gladys Nilsson first came to prominence in 1966, as a member of a group of graduates (Jim Nutt, Suellen Rocca, Karl Wirsum, Art Green and Jim Falconer) who exhibited under the moniker Hairy Who at Chicago’s Hyde Park Art Centre. Despite only exhibiting together for three years from 1966-69, their shows are now cited as the first defining moments of Chicago Imagism. The group are enjoying a recent resurgence of interest, with a blockbuster exhibition at the Art Institute Chicago, Hairy Who? (2018, IL, USA) and HOW CHICAGO! IMAGISTS 1960s & 70s which opens 15 March 2019 at Goldsmiths Centre for Contemporary Arts (London, UK). 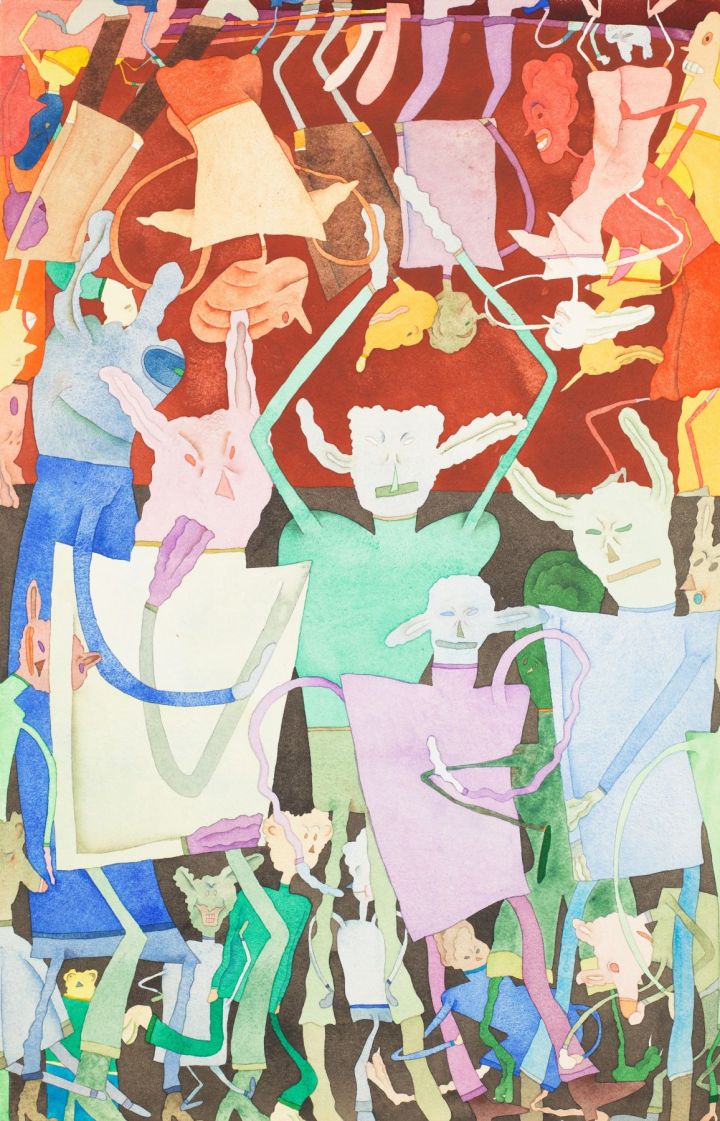 The Hairy Who were six individuals with their own personal figurative style who were united by their education, their sense of humour, a vast knowledge of art history and their use of source material including comics, tattoo design and circus ephemera. More than a series of group shows, the exhibitions were progressive and challenged traditional modes of presentation in the installation, catalogues and posters. The Hairy Who left a long-lasting impression on the art world, reaching cult status, and are revered by many artists including Peter Doig, Jeff Koons and Kerry James Marshall. 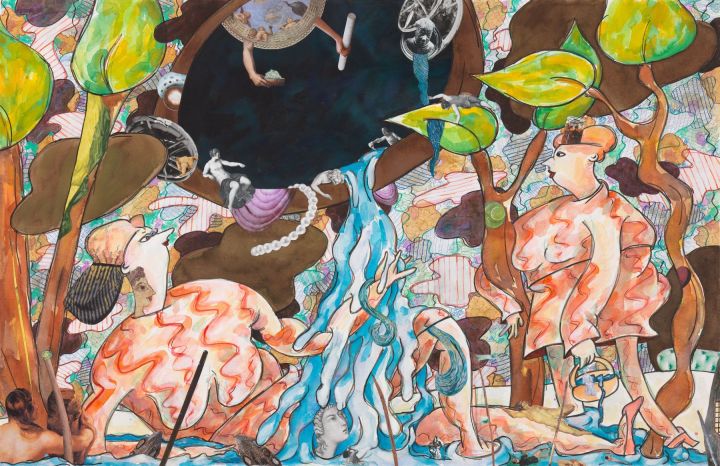 ‘ I do like paper. I honed in on paper very early on in terms of material. I have done some canvas work, but that’s few and far between. It’s the paper stuff.
I just love paper.’ 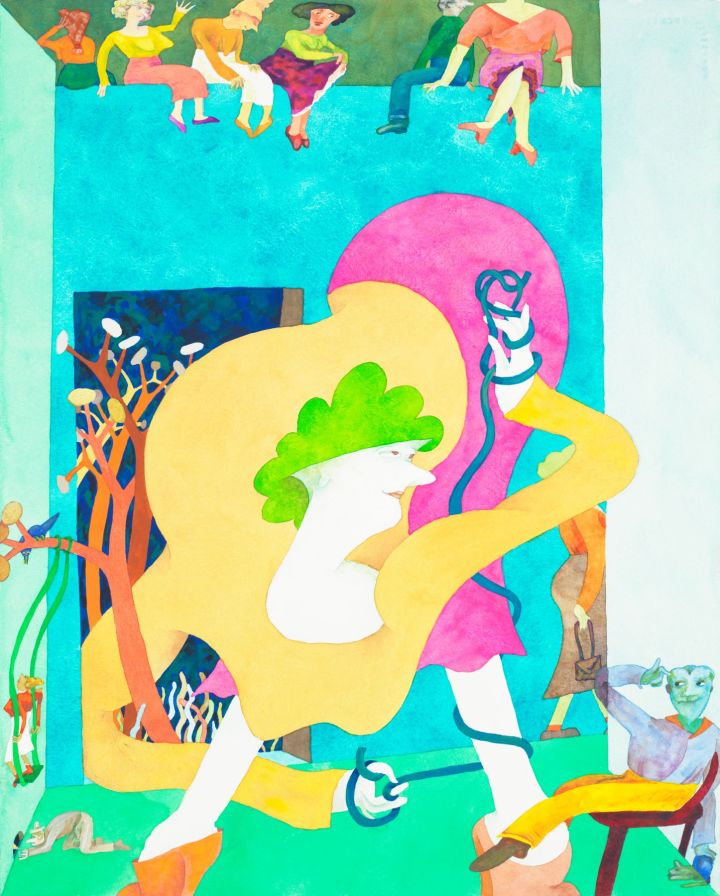 ‘Before I paint, I might listen to some music. I don’t put the paper on the table until I’m actually ready to work with it. I’m walking around kind of looking and thinking about the painting I’m working on. Then I come over and put the paper on the table, scatter my weights around the table, sit and stare at it, decide if I need clean water, play a few hands of solitaire while I’m thinking. I’m looking at the work, contemplating if it’s going the way I want it to go. Is this color working? If everything is working, what am I going to tackle next? Sometimes 15 minutes is all you need to get an idea going and put the paint down. Then I might look at the work and decide: Do I want to work on a big area or how much time do I have because there’s a lot of in and out? I don’t mask anything out. I use my handed brush to manipulate the little areas. I ask myself if I want to tackle some small areas to begin feeding in color. Those are the kinds of things I think about.’ 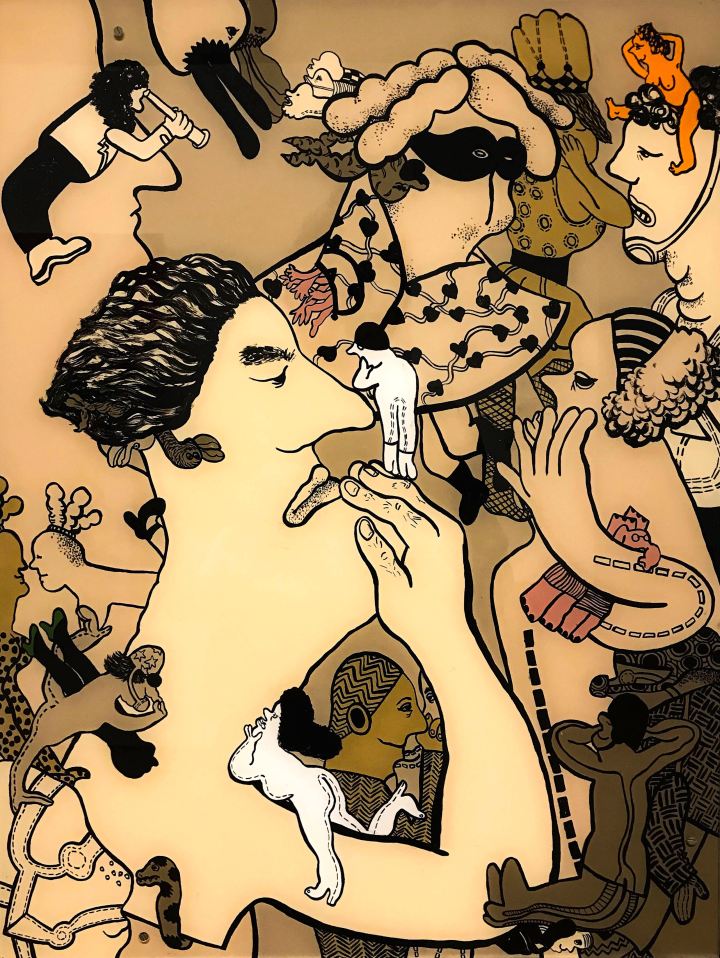 Gladys Nilsson’s influences were far ranging and included German Expressionism, 15th Century Italian painting, Egyptian tomb murals, Cubism, and, more specifically, Whitney Halstead, Kathleen Blackshear, James Ensor, George Grosz, Paul Klee, Georges Seurat, John Marin, and Charles Burchfield. The result was a style that bordered on surrealism and pop, fantasy and cartoon. She took the human figure as her main subject, magnifying, multiplying, and distorting these figures as she saw fit. Though her work is technically very accomplished, she is not as well known as some of her Hairy Who colleagues, because, art historically speaking, paper was seen as a lesser medium than, say, canvas. Also, art world bias has always been in favor of male rather than female artists. Both of these facts angered Gladys, who had a true love for paper and believed that art could not and should not be classified as either masculine or feminine. (wikiwand) 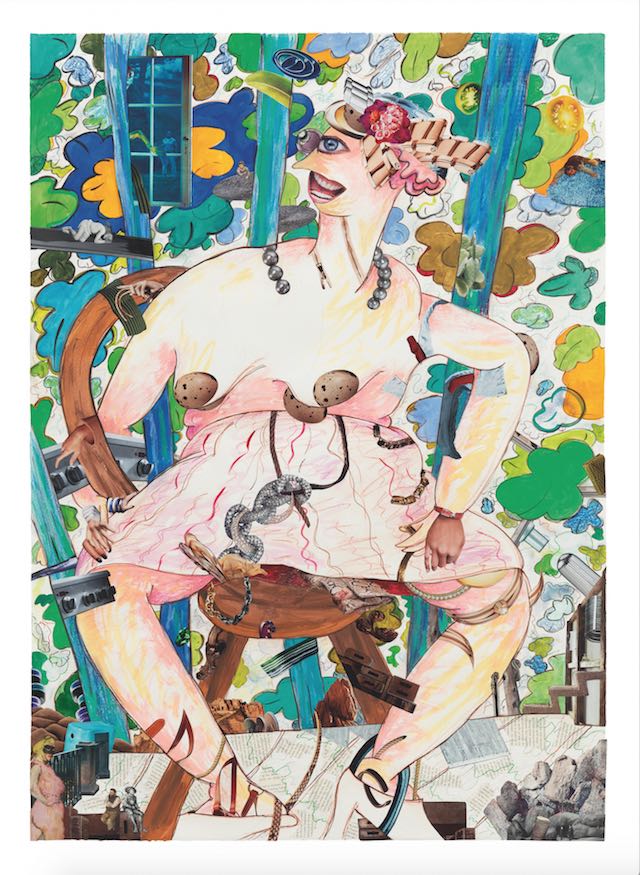 So there were a number of artists that – I mean, too many for me to even remember. But Beckman and Ensor, certainly, right off the bat were just – and then going back into, you know, Duccio, Giotto, and then work your way forward, certain things. And I became really fascinated by the use of space or lack of space in Beckman’s pieces and Ensor, some treatments, also the same where you really have this distortion that goes on. And that is something that I filed away for my own use, as well as – and someone just – someone said to me when I was giving a talk on my work quite a few years back, you know, saying, “Oh, well, you also suffer from a horror vacui.”

And I couldn’t hear him, quite. And I said, “What? What?” He said, “Your horror of the vacuum.” “Oh, yes, well, that’s true. I do. I do.” I can’t – you know, I think – Jim and I saw a show at the Guggenheim – probably back in like ’63 or ’4 – of Munch, who is another one that I dearly love. And some of the pieces that Munch had – that they had of Munch’s in that show were these large, standing portraits of industrialists. So here were all these more-than-life-size men standing with very imposing postures in the middle of – I mean, there wasn’t much else going around except maybe scumbled color or something. 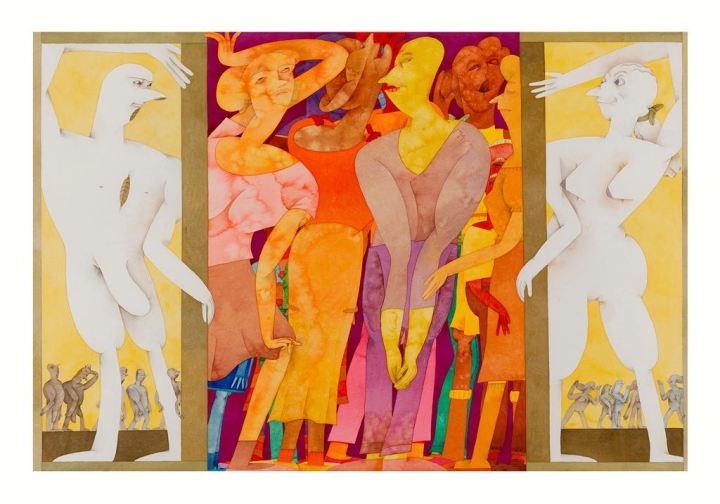 And I was so taken with those that I would dearly love to do just some big, imposing portrait. That’s it. [Laughs.] But the minute I might start to say, “Well, I’m going to really strip a lot of the things that I’m involved with and just have this big, standing figure,” it doesn’t work. Because in my mind, the figure has to interface with something else. So then another figure gets added. And that’s not enough. And then another figure. And then before you knew it, you know, the whole piece of paper was filled with figures, anyway. 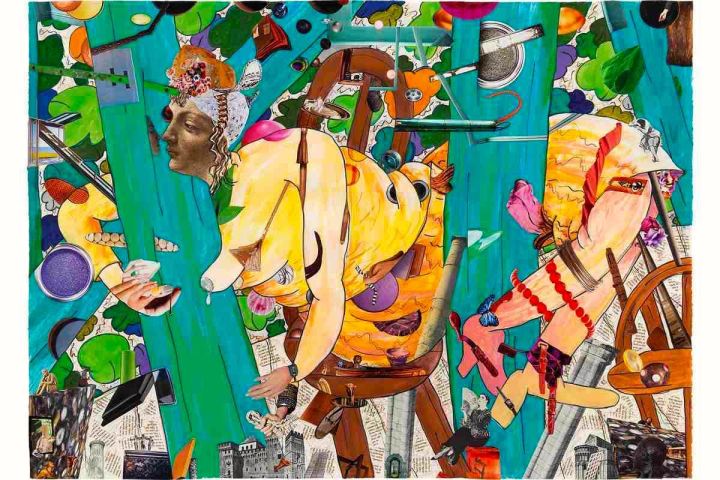 I’m a very positive person. My glass is always half full instead of half empty. I always have been able to see the humor in a lot of situations. I like comedies. I think it takes a lot more structure and ambition to make a good comedy than to make a drama – probably unfairly said, for all the drama people. But I think that comedy is a very high art. I think it’s been given, you know, a bad trait or something. I don’t know. I just have a sense of humor. I like to laugh.
I went through a big period of time when I was reading a lot of Thomas Mann and Joseph Conrad. Those were two that I really liked a lot. And then as I got older, I decided I needed something a little more frivolous. And when I’m traveling, I just have all of these really awful airport kind of books that you read and throw away, because they just mildly entertain you and they take you away from where you are at the moment.
I like mysteries. And I have a whole series of mystery writers that, you know, I like a lot that I am constantly – I’m at my library every day. I love going to the library. Read a current magazine. 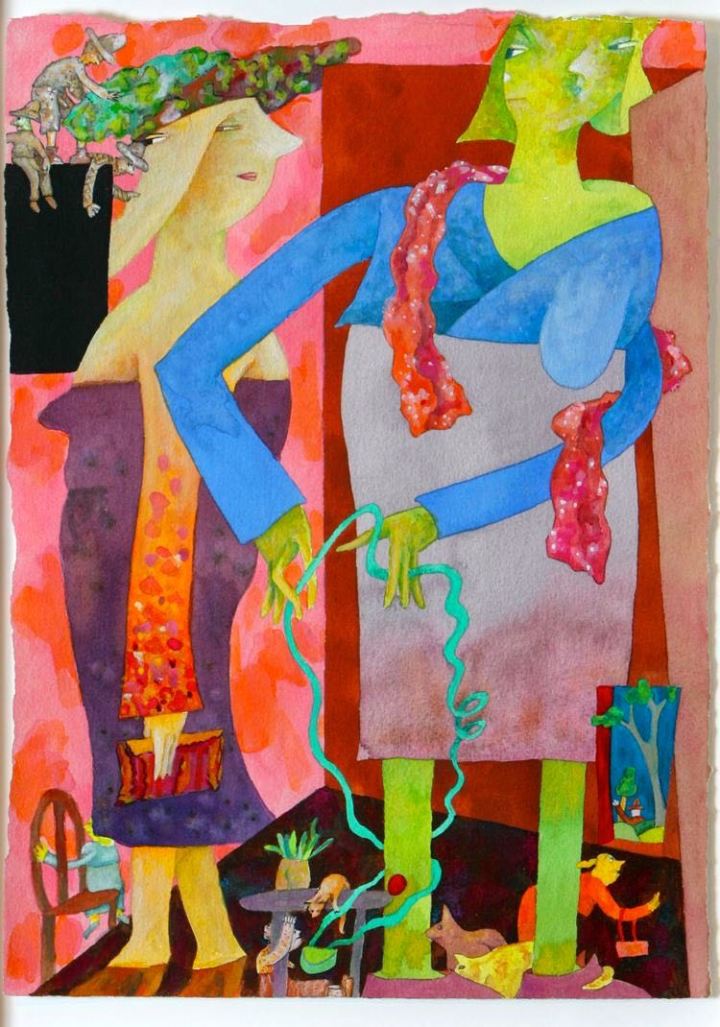 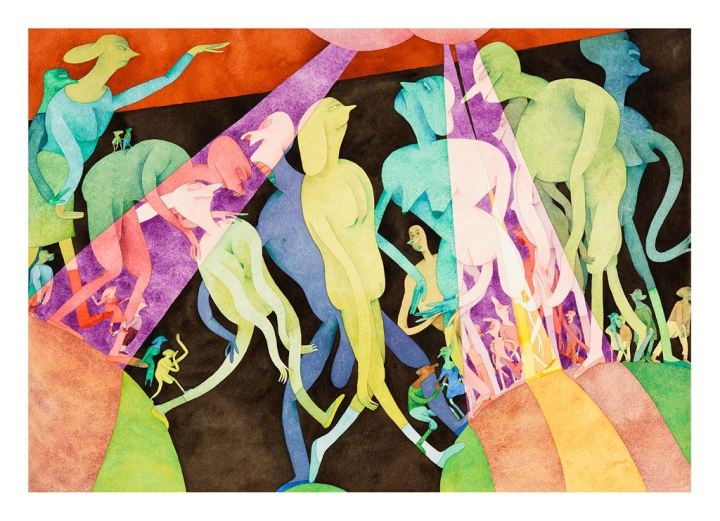