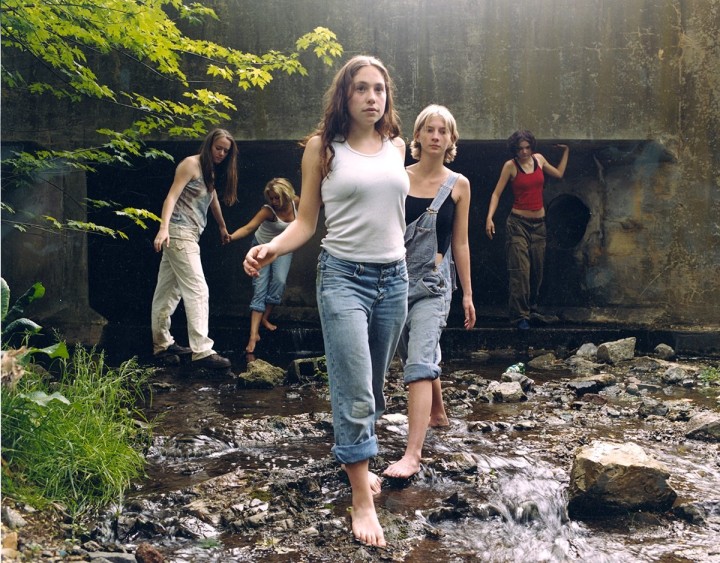 Justine Kurland is known for her utopian photographs of American landscapes and the fringe communities, both real and imagined, that inhabit them. A lifelong nomad, Kurland takes photographs during cross-country journeys that reveal the double-edged nature of the American dream.  She presents a reality where utopia and dystopia are not polar opposites, but rather fold together in an uneasy coexistence. 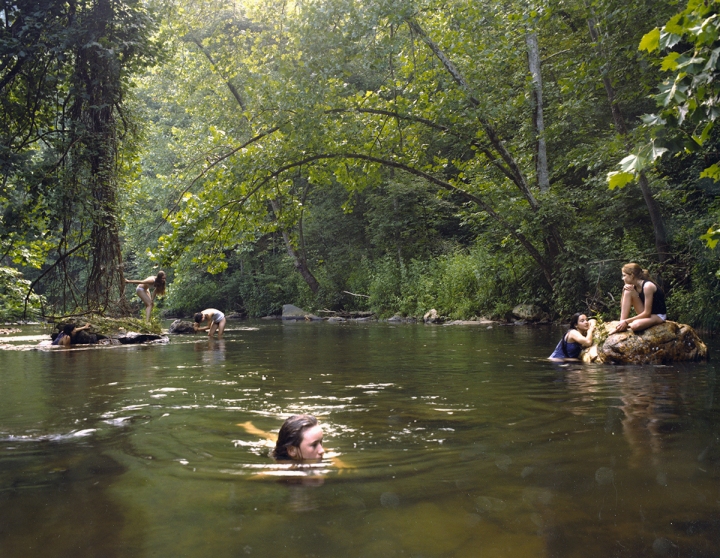 Danger is always just around the corner in Kurland’s work. But what is this danger, exactly? We are used to the teen-age girl who is constitutionally imperilled by virtue of her vulnerable, sexual body. And while there is a rich cultural history of the adolescent who is terrifyingly impervious to the rules of adults—from Kubrick’s futuristic “Clockwork Orange” Droogs to Larry Clark’s spaced-out skaters in “Kids”—such representations rarely put young women front and center. In this way, Kurland’s images of lawless girls, whose menace is a form of power, are almost utopian.
(Naomi Fry-New Yorker)

Justine Kurland was born in 1969 in Warsaw, New York. She received her BFA from School of Visual Arts, NY in 1996, and her MFA from Yale University in 1998. Her work has been exhibited extensively at museums and galleries in the U.S. and internationally.  Museum exhibitions have included Into the Sunset: Photography’s Image of the American West at the Museum of Modern Art, NY (2009) and Role Models: Feminine Identity in Contemporary American Photography at the National Museum of Women in the Arts in Washington, D.C. (2009). Kurland was also the focus of a solo exhibition at CEPA in Buffalo, NY (2009). Her work is in the public collections of institutions including the Whitney Museum, the Guggenheim Museum, and the ICP, New York; the Corcoran Gallery in Washington, D.C.; and the Museum of Fine Arts, Montreal.

“I staged the girls as a standing army of teenaged runaways in resistance to patriarchal
ideals,” she says. “The girls in these photographs have gathered together in solidarity,
claiming territory outside the margins of family and institutions.” 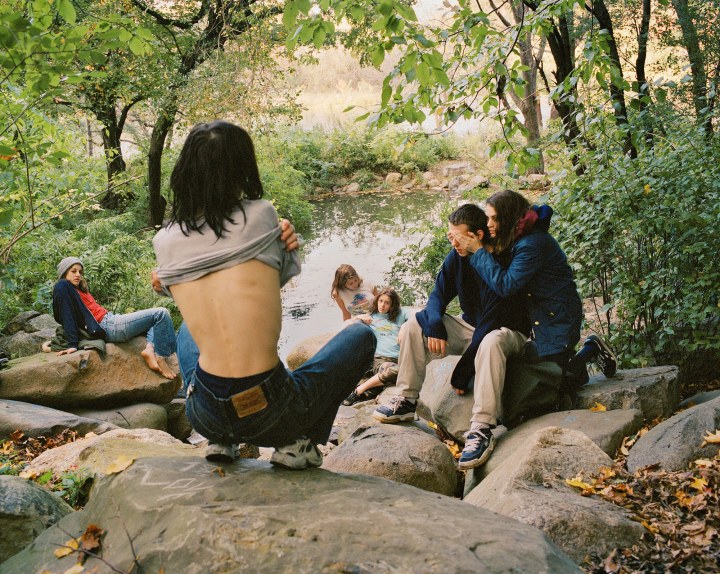 Starting in New Haven, where she was finishing her graduate studies at Yale, Kurland drove across the country (with a stint in New Zealand) photographing adolescent girls in scenes that are part bucolic idyll, part Lord of the Flies. A gritty, outlaw narrative connects scenes often photographed with the composition and soft light of 19th-century landscape paintings. (Kurland named her son Caspar, after all, for Caspar David Friedrich.) Three of the images have “Boy Torture” in in their titles, but unless the girls are tormenting one, boys seldom feature. Sex simmers under the surface, not to mention – and more importantly – self-sufficiency. These ad hoc communities of young women are precursors to Kurland’s series a few years later, Of Woman Born, pastoral photographs of naked mothers and their small naked children who seem just as self-reliant. 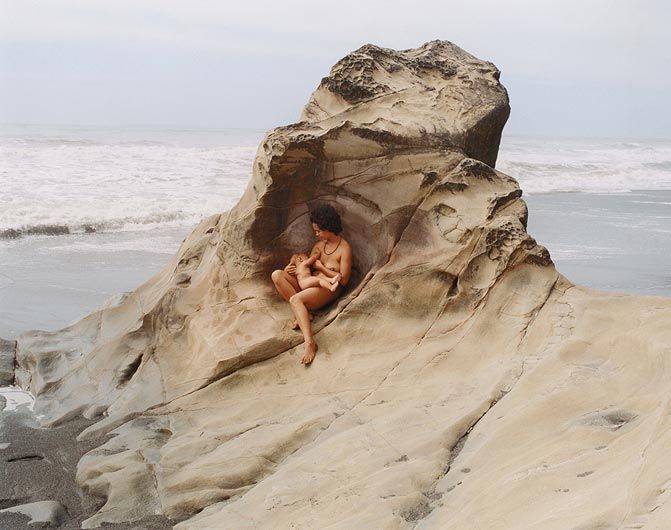 Her photos instead depict a world of American countermyth, one populated by heroes with names like Sandy, Jackie, Lita, Joan, or Cherie instead of Huck and Holden. As a woman living out of her car, perverting the verité tradition of road-trip photography’s male canon day by day, she had one foot planted in that romantic realm. “Behind the camera, I was also somehow in front of it—one of them, a girl made strong by other girls,” she reflects. Her pictures of them appear as glorious establishing shots or pivotal moments in an epic of overlapping plotlines. And taken all together—a rare opportunity that this graceful installation affords—they offer a vivid daydream of widespread revolt and cooperation among girls, a vision as poignant and tantalizing as ever.
(Johanna Fateman is a writer and owner of Seagull salon in New York.) 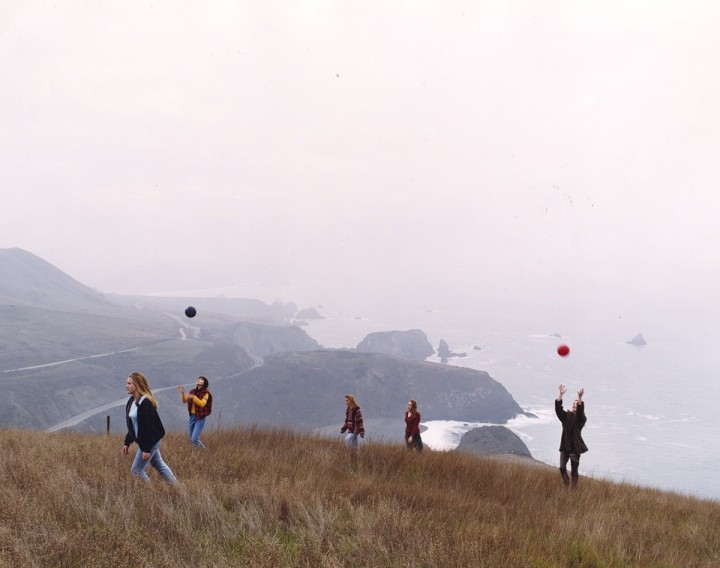 “I channeled the raw, angry energy of girl bands into my photographs of teenagers,” she writes in the monograph that accompanies the show. “All the power chords we would ever need lay within reach, latent, coiled in wait.”

As for the girls themselves:
“None of them live in girl collectives as I imagined. But dreams make way for other dreams. I like to think that no matter what, they sometimes look at the pictures and remember, however briefly, that they were once free.”
(Mitchell-Innes & Nash New York) 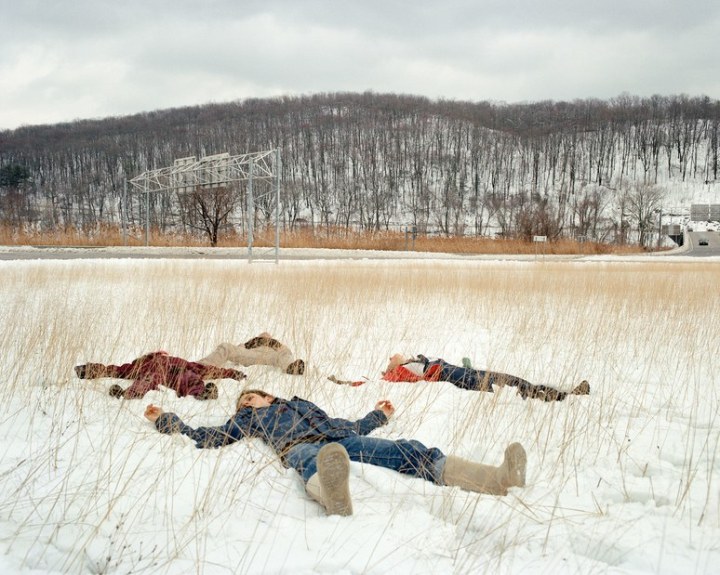 None of these images feature rock stars, though. For her initial experiments
Kurland shot around Manhattan with a boyfriend’s fifteen-year-old daughter as her model, then graduated to total strangers. She would cruise for collaborators near high schools, she recalls, then drive a carload of girls to “a place where the landscape opens up—a place to plant a garden, build a home, picture a world.” (Johanna Fateman)

I grew up in New York, so I didn’t know how to drive. I learned how to drive in Graduate school in New Haven. Dan Torop taught me how to drive. When I was younger, I had this idea of the wind in my hair. The sense of freedom and this idea of going west, the idea of the west was always so exciting. The more you went west, things got bigger and bigger, the mountains, the trees. I remember first getting to California and dancing on the side of the road to music blaring out of my car. This feeling of exhilaration and happiness to be there. There is something else about driving, how slowed down and boring it actually is that there is this real meditative space. Like when the sun passes over the trees in a certain way, you are really in tune with it because you have been so sensorily deprived.

There was this thing about reading Jack Kerouac, something about American identity; it is interesting to think that freedom is one of those words that changes so dramatically. 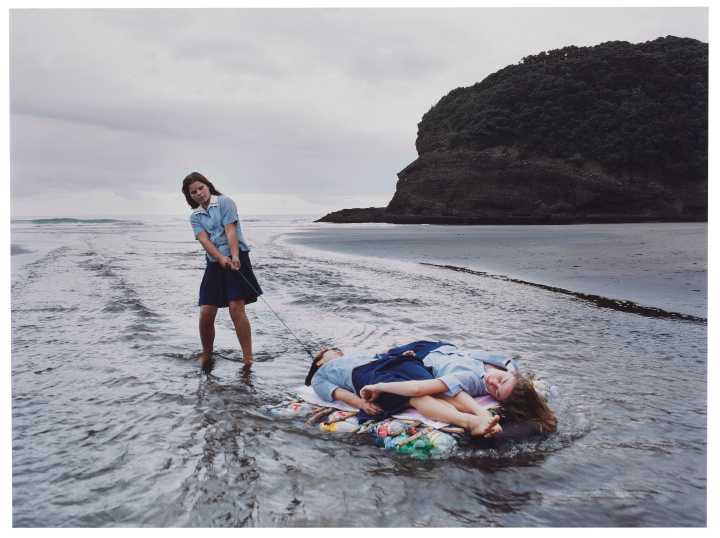 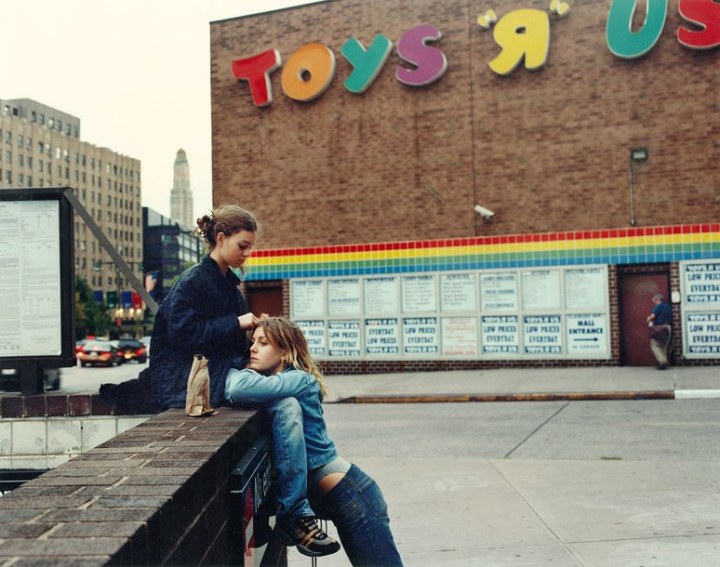